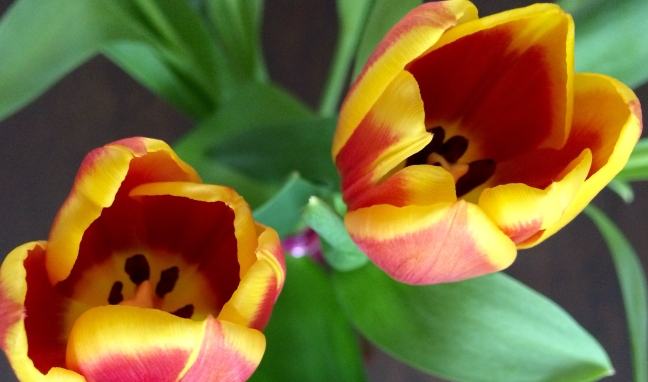 I have written this note in 2014, thinking I would use it as an introduction to my book of poems, Releasing the Porcelain Birds: Poems After Surveillance, as a way of explaining what was on my mind as I dealt with the reality of being an ordinary citizen under government surveillance.  In the end, I decided that the poems should stand their own ground, and did not publish this with the book.  Now,  I think it is time to put this out there, as I think it is more important than ever for people like me to tell their own stories of life and creating literary language. Here is my own story:

‘Poetic imagination is the only clue to reality.’  –Ernst Cassirer, from An Essay on Man

‘The imagination is the liberty of the mind.’ –Wallace Stevens, from ‘Imagination as Value’

The following poems respond to the surveillance files kept on my family from 1961 until 1989, when we left Romania as political dissidents.  They include text from the files as quotations inside the poems and sometimes also entire files in literal translation.  I chose to respond to these documents in the language of poetry partly because they strike me as a narrative on human nature; partly because they stirred a certain emotional response that I could not express otherwise; partly because some of the images existent in these documents stand alone as metaphors.

The perspective on our lives in the files is one of emotional detachment. As a reader I see everything ‘from above’, from the point of view constructed in the narrative from those who watched us: from the church bell tower, from outside the windows, from across the table or across the street (when informers were our friends), from the officialdom of frames of numbers, dates, and initials at the top of each page and at the end of each ‘strict secret’ report.  While I can testify that I saw them watching us, in these documents they recount what they saw in our house: one time, for example, a young woman with a grey hat, another time a cousin wearing a young pioneer’s uniform.  In the narrative provided by these documents, I and my family are most of the time non-persons: we are ‘objects of observation’ which is secret police speak for ‘targets’.  All together the experience of reading these files has the effect of de-familiarization of the self from its own narrative, its own story, rather than confirming the story of the self.

Understanding my own past in view of the files requires incorporating their narrative of my life into my own sense of self.  I am at once the subject and the researcher of these documents. I feel like a medic who suddenly sees the cancer that spread inside her own body unnoticed for all these years. Living in the West placed our experiences in Romania in a new perspective. What we accepted then, we would not accept now.

It is in this space of double narrative, of multiple perspectives, that the language of poetry can enter to help because imagination deals well with a deformed reality both in terms of having resources to articulate it but also to re-orient it. Writing poetry helps mitigate the awkward feeling of being caught somewhere between reason and emotion, and work with memory, time, and new information.

Writing about secret police diaries requires a new poetics.  I call it the poetics of quotation marks. Everything jumps out and cries to be put in, inside the fabric of the poems and sometimes even compete with lyrical language, like an unexpected evil guest who comes for a night and takes over your house. By lyrical language I mean the balancing language of reason, where things appear lucid, where moments in our lives are presented in their honest loss and struggle, a language with a certain luminous, bearable rhythm, capable of handling the deformities of reality and render them comprehensible, not justifying them but present them as they are.  It might seem strange to argue that imagination is needed to portray reality but this is a solution.

Hundreds of thousands of others live with a record of their lives written by the secret police, with that all-seeing eye that has followed them for years and years in their bedroom, on the street, at the prison visits, at work, and has created alternative characters out of them, alternative selves.  It’s the human condition of living under observation that I am after.  I tried to capture some of it in these poems, which are part of a book-length sequence called Releasing the Porcelain Birds, here the symbol of imagination that takes us to flight and freedom.